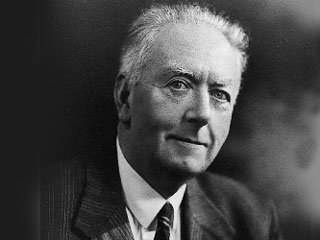 Arthur Holmes (1890-1965) was an English geologist who made two important contributions to the development of geological ideas: the use of radioactive isotopes for dating minerals and the suggestion that convection currents in the mantle play an important role in continental drift. He held the chair of geology at Edinburgh University from 1943 until 1956.

Holmes presented his ideas on mantle convection in a lecture to the Geological Society of Glasgow on January 12 1928, and the paper was subsequently published in the society’s Transactions for 1931. The 2010 BBC 2 series “Men of Rock”, presented by Professor Iain Stewart, featured major contributions to world geology by Scottish geologists, including Holmes’ 1928 explanation of how continents move around the surface of the planet.

Holmes was one of the first geologists to support Alfred Wegener’s concept of continental drift, which became widely accepted following the development of the theory of plate tectonics in the 1960s. One of the key elements in plate tectonic theory is the phenomenon of seafloor spreading, and it is notable that Holmes’ 1928 paper anticipated this concept by 35 years.

The full text of Holmes’ paper appeared in volume 18 of the Transactions of the Geological Society of Glasgow, which was published in 1931. The paper can be viewed on the Lyell Collection website. (You can view an extract from the paper without logging in to the website, but will have to log in to view the full text. Members of the Geological Society of Glasgow can obtain a user name and password that will allow them to log in; details of how to do this can be found here.) A short summary of the lecture appears in the account of the meeting of January 12 1928 in the society’s original minute book. A scan of the pages of the minute book containing this summary, along with a summary of the subsequent discussion, can be found here. The following is the full text of the summary.

The hypocentric curve was interpreted by Wegener to indicate the existence of two dominant kinds of materials in the earth’s crust, sial*  corresponding to the lighter continental areas, and sima* to the denser oceanic floors.  This view has been confirmed by Miller’s study of surface seismic waves.  The properties of the sima of the Pacific floor correspond to those of gabbro.  The effect of compression on gabbro would be to transform the material into eclogite.  Such change of density and the simultaneous action of isostacy would lead to subsidence of the compressed belt and therefore to the formation of oceanic seeps.  Applying the principle of isostacy, it is easily shown that the average thickness of the sial should be about 30 km.  This conclusion is confirmed by the recent work of Jeffreys on near earthquakes, which reveals the existence of an upper layer 10 km. thick (identified with granitic rocks); an intermediate layer 20 km. thick (supposed by Jeffreys to be tachylite, but identified by Holmes with diorite and quartz-diorite on petrological and thermal grounds), and a lower layer which may be eclogite or peridotite or both.  The continents are thus thin slabs of sial, ranging in composition from granite to diorite, averaging 30 km. thick by about 3000 km. across, and embedded in material which on any interpretation is much more dense than sial.

Thus for physical reasons it becomes as impossible to “sink” a continent as to sink an iceberg. Considerable areas of the Atlantic and Indian Oceans were formerly occupied by continental masses, and since these ancient lands are no longer there we are driven to believe that their material has been moved away sideways.  Evidence of lateral movement is also forthcoming from tear faults;  overthrust structures of the Alpine type;  the geological history of geosynclines;  the echelon structures of the Asiatic Island festoons; and by the opening of the Urals geosyncline at the same geological moment as the compression of the Caledonian Mountains of Britain and Scandinavia.  Moving the continental regions back in the directions indicated by the evidence leads to a Permo-Carboniferous reconstruction similar to that of Wegener’s diagrams, a reconstruction that is independently called for on palaeo-climatic grounds.  Wegener’s deduction that the equator of the time ran through the coalfield belt of N America to China is supported by the distribution of Permo-Carboniferous laterites and bauxites.  It is concluded that there is now evidence pointing to the former occurrence of continental drift on a scale of the same order as that advocated by Wegener.

The dominant forces available to move the continental slabs in the required directions (outwards from Africa towards the Pacific) tend to set up a westerly drift (tidal action) and a drift from the poles towards the equator (due to the departure of a polar section through the earth from a circle).  Since our actual geography is totally different from the picture thus visualised, we have an indication that some other agency must have been at work to move the continents into the positions they now occupy.  There seems no escape from the deduction that slow but overwhelmingly powerful currents must have been generated in the underworld at various times in the earth’s history.  These, as suggested by A.J. Bull, are probably convection currents set up in the lower layer as a result of differential heating by radioactivity.  In place of the mobile basaltic magma of Joly, one imagines a highly viscous sima heated unequally to very great depths.  A sheet-like upward current would develop beneath the region of greatest heat output.  In turning over at or near the base of the sial it would exercise a powerful drag on the under-surface in two opposed directions, leading to the formation of a geosyncline.  The return downward current would be looked for just beyond the continental edges. A continental mass would move forward by stoping of the heavy ocean floor just in front.  When this ceased, mountain building would set in, and ultimately the direction of the currents would be reversed.  Convection currents which themselves move their boundaries and the sources of much of the heat responsible for their existence can clearly lead to periodic alternations of heating and cooling in any one region.

* In his “Principles of Physical Geology”, first published in 1944, Holmes used the term sima for a dense ultrabasic rock with silica, iron and magnesia, and sial for the less dense rock with silica and alumina. In this book he also outlined his ideas on mantle convection and illustrated them with a diagram. This diagram also appeared in subsequent editions of the book. The following is the version from the fourth edition, published in 1993. The diagram clearly shows how well he anticipated the concept of seafloor spreading from mid-ocean ridges (constructive plate margins), and even how he partly anticipated the concept of subduction zones (destructive plate margins). 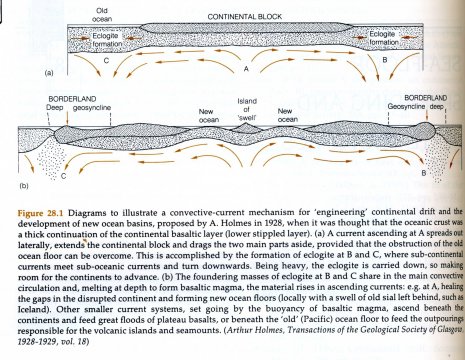