People often ask me why I choose to look for crinoids when they are “only stems and easily found”. The reason for collecting them is that, although stems are easily found, the cups (calyx) and arms are not common.

Crinoids are a group of the echinoderm family. The easiest way to describe them is a “stalked starfish”. These animals appeared in the Cambrian period and are still exist in the present day, although they are sometimes different in appearance from their fossil ancestors. Living forms provide valuable evidence on how the fossil species must have lived. An array of branching arms (brachials) is arranged around the top of a globe-like structure called the cup or calyx; this contains the main body of the crinoid. Many had a flexible stem which anchored them to the sea floor. The heyday of crinoids was the Carboniferous period around 358-298 million years ago. Roughly 5000 species of fossil crinoids have been discovered to date.

In my local Ayrshire limestone quarries the rocks from which I collect are mainly of the mid-Carboniferous Dockra (Blackhall) Limestone. Most of my finds are uncovered by the usual approach of searching through scree and splitting open shale blocks with a hammer and chisel, but to collect the smaller and more interesting small remains I have been collecting sediment samples to wash through sieves; this has proved really effective for isolating remains and I have made many new discoveries with this method, including juvenile remains. Crinoid stems are relatively abundant in all the beds but, in a few, complete cups have been preserved. 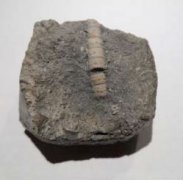 Very little has been written on these animals and I could only find reference to two species that I had collected. However, some other finds did not fit in with these. After a lot of study and questions I discovered that I had nine species in total. A few of them are just broken cups and plates but are distinctive enough to identify the species. The next challenge was to piece together what fragments belonged to which animal (not an easy task when most of them are closely related), but with the help of James Wright’s Monograph of the British Carboniferous Crinoidea it has been possible to reconstruct what they looked like in life.

My interest has grown into looking at sites where “just crinoids” are found and trying to properly describe these fascinating creatures. Scottish geology is perfect for this as the limestones and shales from which they come from are easily located. Dr Neil Clark of the Hunterian Museum and Dr Steven Donovan of Naturalis Biodiversity Centre, Leiden, have been a great help with these projects, including showing me specimens in the Museum’s collection, even though some of them have not been described as yet.

If you have news of a recent event or discovery, opinions on geological matters, or wish to let people know about aspects of geology in the Glasgow area or the wider world, then please send your article to the Hon. Secretary, Simon Cuthbert. Articles should be no longer than 300 words. Colour images are welcome but should reproduce well in monochrome; all images must comply with copyright and information from other sources should be acknowledged.