Percy Bridgman, an American physicist active during the first half of the 20th century, has just had Earth's most common mineral named after him.

Earth's lower mantle is largely composed of magnesium silicate (MgSiO3), in the form of a solid phase with a perovskite crystal structure. As the radius of the Earth is around 6400 km, and the lower mantle is about 2100 kilometres thick (see figure below), this phase makes up 38 per cent of Earth's entire volume, making it the most abundant solid phase in Earth. However, it is very rare at the Earth's surface, and geologists have until now been unable to find a natural sample of it. As the International Mineralogical Association's rules require a natural sample of a mineral to exist before the mineral can be recognised and named, this solid phase has not been previously been recognised as a mineral or given a formal name. 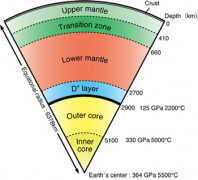 However, Oliver Tschauner at the University of Nevada in Las Vegas and his colleagues have finally discovered a sample that meets the criteria, and the mineral can now be named. It will now be known as bridgmanite.

Ironically, the bridgmanite that Tschauner and his colleagues found doesn't come from Earth's interior. It actually arrived on Earth in 1879, buried within a meteorite (the Tenham L6 chondrite) that crashed into Australia. During its journey through the solar system, this meteorite experienced temperatures of 2000°C and pressures of 24 gigapascals, which were extreme enough to replicate conditions deep inside the Earth and allow bridgmanite to form.

The bridgmanite would have been expected to break down as the meteorite returned to normal temperature and pressure. The fact that it didn't implies that the drop in temperature and pressure must have been extremely rapid, essentially "freezing" the bridgmanite in place before it could decay. Today it exists in certain regions of the meteorite as "crystallites" between 40 and 200 nanometres long.

Tsauchner says that, while it is important to be able to name bridgmanite finally, having natural samples of the mineral is significant for another reason. They can now be chemically analysed to reveal some of the trace elements that can naturally slot into bridgmanite's crystal structure, and the results of this analysis will help refine models of how the deep mantle behaves.

Percy Bridgman was a Nobel laureate who is sometimes called the father of high-pressure experiments. "His advances are what led to the ability to synthesise and study deep Earth materials," says Thomas Sharp at Arizona State University in Tempe. "He made mineral physics possible."

This story is based on an article in New Scientist. The original paper describing the discovery of bridgmanite was published in Science (DOI: 10.1126/science.1259369).