Rocks are composed of minerals. A mineral is a naturally occurring substance which is usually solid, crystalline, stable at room temperature and inorganic.

There are almost 5000 known mineral species, yet the vast majority of rocks are formed from combinations of a few common minerals, referred to as “rock-forming minerals”. The rock-forming minerals are: feldspars, quartz, amphiboles, micas, olivine, garnet, calcite, pyroxenes.

The abundance and diversity of minerals depend on the abundance in the Earth’s crust of the elements of which they are composed. Eight elements make up 98% of the Earth’s crust: oxygen, silicon, aluminium, iron, magnesium, calcium, sodium and potassium. The composition of minerals formed by igneous processes is directly controlled by the chemistry of the parent body. For example, a magma rich in iron and magnesium will form minerals such as olivine and pyroxene (as found in basalt). Magma richer in silicon will form more silica-rich minerals such as feldspar and quartz (as found in granite). It is unlikely that a mineral will be found in a rock with dissimilar bulk chemistry unlike its own; thus it is unlikely that andalusite (Al2SiO5) would be found in an aluminium-poor rock such as a quartzite.

Some minerals are easily identifiable; others can only be recognized only by the use of a petrographic microscope or by complex analytical techniques. The following criteria are used to differentiate minerals in hand sample. Most minerals cannot be identified from one particular property, and so it is advisable to use several of the diagnostic criteria outlined below. A hand lens will assist you greatly.

Colour is one of the most obvious characteristic of a mineral, but generally not the most useful diagnostic feature. Depending on impurities, individual mineral types may come in a vast variety of colours. For example, ruby and sapphire are differently coloured types of the mineral corundum (Al2O3). The red colour of ruby is due to the presence of the element chromium. Sapphires may come is a vast variety of colours; blue is the most familiar colour, but yellow, orange, green, pink, orange and brown varieties are also known. Garnets may also come in a large range of colours, depending on their composition. They can be found with virtually any colour, although blue garnets are exceptionally rare. It is therefore advisable not to rely on colour alone to identify a mineral.

Crystal habit refers to the characteristic shape of a mineral unit (either an individual crystal or an aggregate of crystals). Crystals with well-developed faces are referred to as “euhedral”; for example garnet crystals are often euhedral. Minerals may also occur as aggregates of crystals; for example, asbestos is usually found as an aggregate of very fine fibres. The following list gives examples of different crystal habits and examples of common minerals that may exhibit each habit. 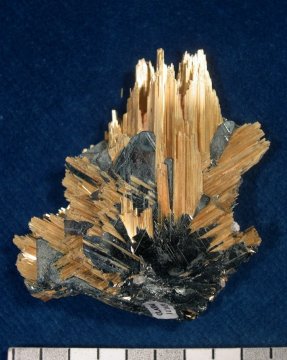 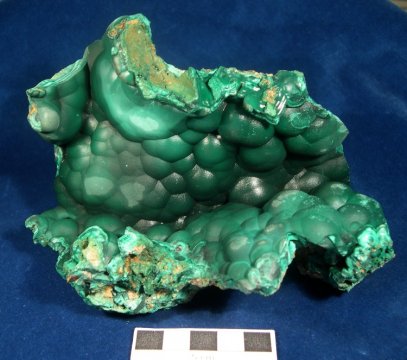 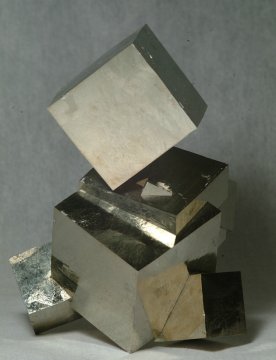 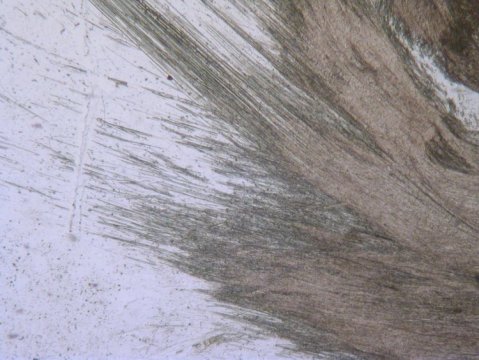 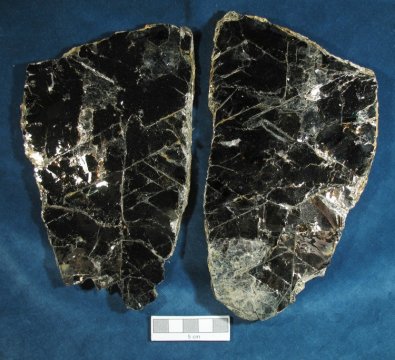 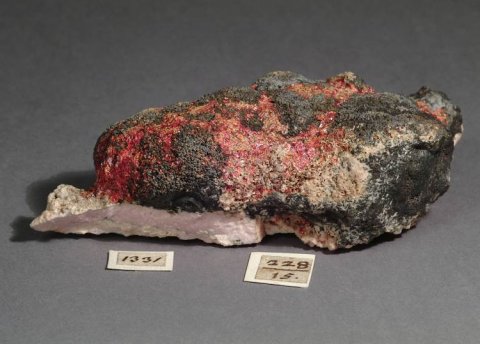 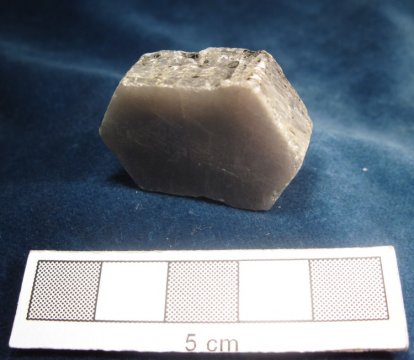 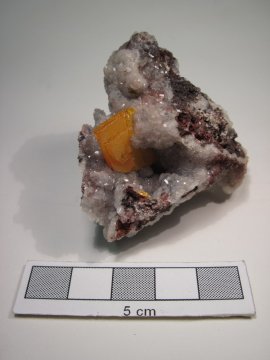 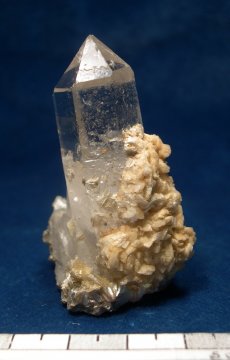 Hardness is a measure of how resistant a mineral is to scratching. This physical property is controlled by the chemical composition and structure of the mineral. Hardness is commonly measured on the Mohs scale. This is defined by ten minerals, where each mineral can scratch those with a lower scale number. Diamond (hardness 10) can scratch everything below it on the Mohs scale, but cannot itself be scratched, whereas quartz (hardness 5) can scratch calcite (hardness 3) but not corundum (hardness 9).

The streak of a mineral refers to the colour of the mark it leaves behind after being rubbed against a piece of unglazed porcelain. Hematite provides a good example of how streak works. While this mineral is usually black, silver or brown-red in hand sample, its streak is always a dark blood-red. Chalcopyrite is usually golden-brown in hand sample, but has a green-black streak. Streak can be used only for minerals with a Mohs hardness of 7 or less, as minerals with a hardness greater than 7 will themselves scratch the streak plate.

Lustre refers to the way in which the surface of a mineral reflects light, and is controlled by the kinds of atoms present and their bonding. It is described by the following terms

Greasy – the appearance of being coated with an oily substance; may also be greasy to the touch; e.g. opal

Pearly – the whitish iridescence of materials such as pearls; e.g. stilbite 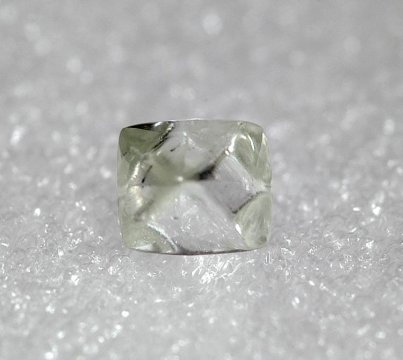 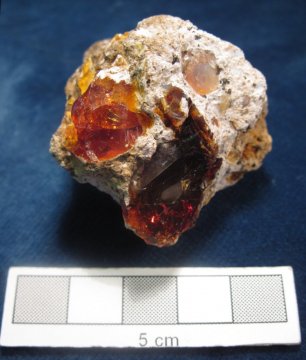 Minerals are composed of atoms, which, for each mineral, have a characteristic arrangement. Weaknesses in the chemical bonds between these atoms cause planes of weakness in the crystal structure. Cleavage is an indication of how well a mineral breaks along these planes of weakness, and  may be a good diagnostic characteristic. Cleavage may be described as “perfect”, ”good”, “distinct” or ”poor”. In transparent minerals or in thin sections viewed though a microscope, cleavage may be seen as a series of parallel lines.

The number of cleavage planes in a mineral may also aid its identification. Cleavage typically occurs in either one, two, three, four or six directions. Micas easily split along their one plane of cleavage to form thin sheets. Amphiboles exhibit two cleavage planes. Iceland spar, a variety of calcite, cleaves readily along three planes of weakness into distinctive rhombs. Galena breaks along three cleavage planes producing cubic fractions. Fluorite and diamond show cleavage in four directions. Sphalerite exhibits cleavage in six directions. Not every mineral displays cleavage. For example, quartz does not have a weakness in its crystal structure, and therefore does not exhibit cleavage. When a quartz specimen is broken with a hammer, it displays conchoidal (shell-like) fracture. 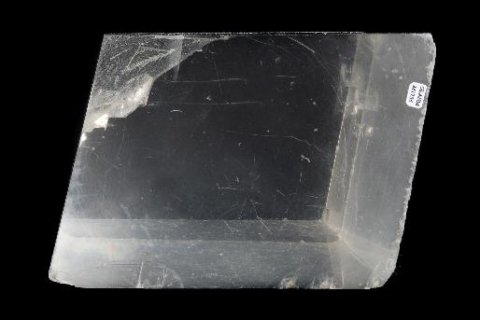 Livingstone, A. (2003) Minerals of Scotland – Past and Present. National Museums Scotland.