A Field Guide to the Geology of Madeira

Chris Burton and Jim MacDonald have both held senior appointments in the University of Glasgow. They have many years’ experience in the teaching of geology and have carried out geological field work in many parts of Europe and in the Atlantic Islands.

From the authors’ foreward:

“Madeira has been a familiar destination to generations of British and other travellers from the eighteenth century onwards; travellers drawn to the island’s equitable climate, its superb scenery, the undoubted delights of Madeira wine and the warm welcome extended by the people of the island. Among these travellers, from the very earliest days of geology, were those for whom the volcanic rocks and their intercalated sediments were of intense interest, an interest expressed in a stream of professional publications in Portuguese, English, German and French. However, the general geology of the island is not easily penetrable by the interested amateur, so in this guide we have attempted to present the geology and geological history of the island in an accessible form which, together with the excursions will, we hope, present a clear picture of the volcanic and other geological phenomena that abound within Madeira.”

The first part of the book gives a description of the geology of Madeira, and includes a glossary of geological terms and an introduction to igneous petrology and geochemistry. The second part describes seven excursions of varying length; three of the excursions are of an introductory standard, while four are more advanced. There are also a glossary of Portuguese geographical and geological terms and an extensive bibliography.

“It is illustrated with black and white maps of the field areas and some beautifully detailed hand-drawn field sketches, and colour plates at the back of the book which show photographs of some spectacular exposures and landscapes. I have never visited Madeira, but some of these images certainly make me want to go there.”

The Geological Society of Glasgow is proud to have published this book, which is an indispensable guide for anyone visiting Madeira and wishing to explore the geology of the island. It can be purchased at the society’s bookshop, or by emailing the society at: books@gsocg.org.

Since the publication of this guide in 2008, the need has arisen to update some of the information contained in it. The great storm of February 2010 changed some of the topography, including the area of Porto da Cruz, and in the same year a new geological map of the island was published along with a revision of the stratigraphy. These and other alterations and additions are reflected in a supplement to the Madeira guide, which was up-to-date as of May 2018. (This supplement replaces an earlier supplement which was published in June 2016.) The new supplement includes a revision of the stratigraphy, an additional excursion itinerary and updated information about other excursions. 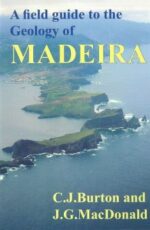