The society recently received an email enquiry from a Mr & Mrs Young who live in the Callander area and who were requesting help in identifying a mystery stone they had found in their garden. As can be seen from the photos, the stone is beautifully folded and has differential weathering between the folds. Mr & Mrs Young said that everyone who had seen the stone had a different opinion as to what it was. 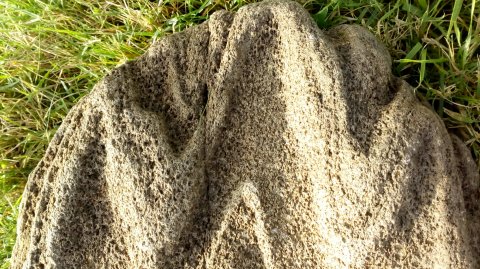 The rock looks like marble (a type of limestone). Marble is made from calcium carbonate (calcite), or possibly dolomite (carbonate of calcium and magnesium). If there is calcite it should fizz if you put some warm vinegar on it. The fold shapes are because the rock has layers with a less soluble mineral in it, possibly a silicate mineral like tremolite or diopside. Since the rock surface was exposed to the weather the rock surface has been etched by water (rain water is mildly acidic). This has affected the purer calcite marble layers more than the silicate-rich layers, leaving the latter standing out as ridges that pick out the fold shapes.

The rock was originally sedimentary limestone with thin sandy beds (now the folded ridges). It has been converted to a marble by heat and pressure, probably in the earth movements that affected all the "Dalradian" slates and schists in the mountains north of Callander, and the same movements buckled the layers to give the wonderful shapes in the specimen. If the rock does come from the Highlands nearby it was probably laid down in a shallow sea about 600 million years ago in the late Precambrian geological era and was folded about 470 million years ago in the Ordovician geological period. It may have been transported to its present location by a glacier a few thousand years ago in the last Ice Age.

Marble is strange stuff – brittle and rigid at the Earth's surface but when hot and under stress for a long time it behaves like putty and deforms into beautiful folds, of which this rock is a great example. Almost like a Medieval carving! But entirely carved by nature.

Simon's description is very clear and comprehensive and yet understandable to someone without advanced geological knowledge. This story provides a good example of the important role that our society plays in answering questions from the public about local geology and generally increasing the public awareness of the rich geological heritage that we enjoy in central Scotland.