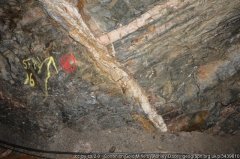 During the 1980s gold-bearing quartz was discovered near a waterfall, Eas Anie, about 4 km from Tyndrum village and close to Cononish farm. The extent of the deposit has been evaluated as important for both gold and silver, with drilling in the 1980s followed by underground development from 1990. The rocks are part of the Dalradian supergroup, deformed during the Caledonian orogeny and known to bear economic concentrations of gold elsewhere eg Northern Ireland.(1)(2)

The website Goldprice.org enables users to see a graph of gold price over time in £/gram.(3) Prices rose from 2009 (c £14/g) to a peak in 2011 of c £37/g, before declining to around £25/g from 2013 to 2016. From the start of 2016, however, the price rose again and has varied between c £30 and c £33/g throughout 2017 to the present. Planning permission for re-activation of workings at Cononish was granted some six years ago around the time of the peak price although progress towards the anticipated level of mining activity was delayed. Later, permission was granted for on-site processing of rock stockpiled from mining some years ago. Several gold ‘rounds’ were struck from this source, and sold at auction to collectors in 2016.(4)(5)

Images of the mine (inside and out) and the area around it can be viewed at the Geograph site here and here.

To find out more about the geology and history of Scottish gold: