A Guide to the Geology of Islay. An introduction to Islay’s geological past with 12 illustrative excursions

(David Webster and Roger Anderton are both members of the society.)

The guide describes 12 varied excursions on Islay that tell the story of Islay’s geological past from 2 billion year old gneiss to the Ice Age. The geology of each excursion is described at an introductory level with geological maps and photographs and for novices the book also contains an "Introduction to Geology" section and a glossary of terms.

For those with a geological background there is a section describing Islay’s geological framework in more detail with some key references for further reading.

The excursions range from leisurely rambles to more demanding longer walks, most of which are readily adaptable with shorter easier options.

At the end of each excursion itinerary, there is a suggestion for a local whisky to finish the day off. (There are currently eight active distilleries on Islay.)

The following extract from the book's preface indicates why the geology of Islay is so interesting: 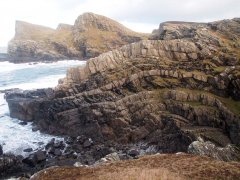 Folded metasandstones of the Smaull Greywacke Formation with Dun Bheolain ("The Opera House Rocks") in the background (photo: D. Webster). This is one of the many photographs in the guide.

The guide is published by Ringwood Publishing. It can be viewed and purchased at the society's bookshop, which is open after the monthly lectures. If you cannot manage to the lectures, or would like to purchase a copy before the next meeting, you can do so by using the society's customised Amazon bookshop.